The year 2019 was a year of re-focusing and changes for the CCBN. The year began with a clearer view of what our network wanted to achieve: the values we chose to represent us were: networking, excellence, growth, trust, and commitment. Also, we chose to concentrate on four main activities: expansion, spiritual input, training, and infrastructure.

Every month, the CCBN training featured an attractive topic presented by a professional in its respective area, such as Manil Ek (HostMobiz) teaching about Digital Marketing, Alex Hales (Business Essential) teaching about Negotiation, John Chhay (Whitten & Roy Partnership) and James Symons (LocknCharge) teaching about Sales, and many others.

During the months of May, June, and July, our members came together to learn about event management by organizing their own event, the CCBN conference, which took place on the 27th of July. The conference was a high point for the network where they were able to connect to other business leaders and celebrate the network’s one-year anniversary.

The preparations for this event already started in January, as a way to celebrate the first year of CCBN. It was a highlight and a major milestone for the CCBN. We were very encouraged by the participation of 26 Vietnamese. We were also honored to have Reverend Heng Cheng join as a speaker, as he envisioned the 3G framework, where Cambodian Christian businesspeople would meet regularly, receive practical training, and encourage each other. CCBN was able to cover our expenses because of the profitability of the CCBN Conference of 2019.

As seen on the next graph, the attendance of the monthly meetings has seen some variation, the average being 21 people per month. The high point was the conference, as many interested people and guests from Vietnam joined the meeting. 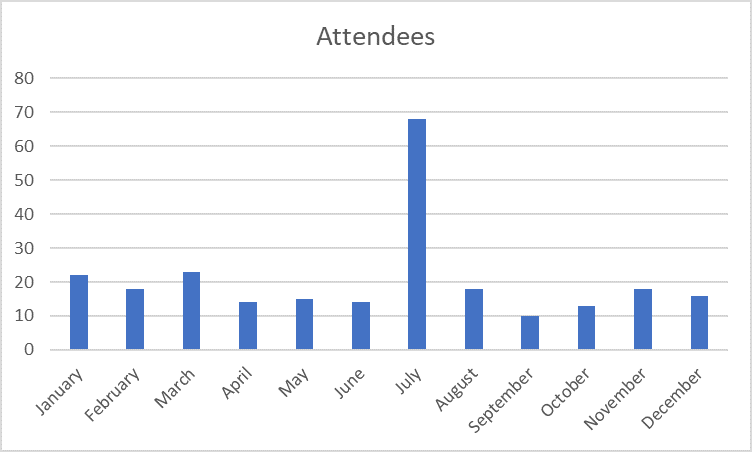 As the year 2019 ends, the CCBN has its eye on expanding our training services to have more in-depth and intensive application to the individual businesses in our network. The CCBN has unanimously decided to approve the launch of a formal entrepreneurship course in the next year. The executive committee of the CCBN is hopeful that the network will grow in its influence and professionalism during the year 2020.